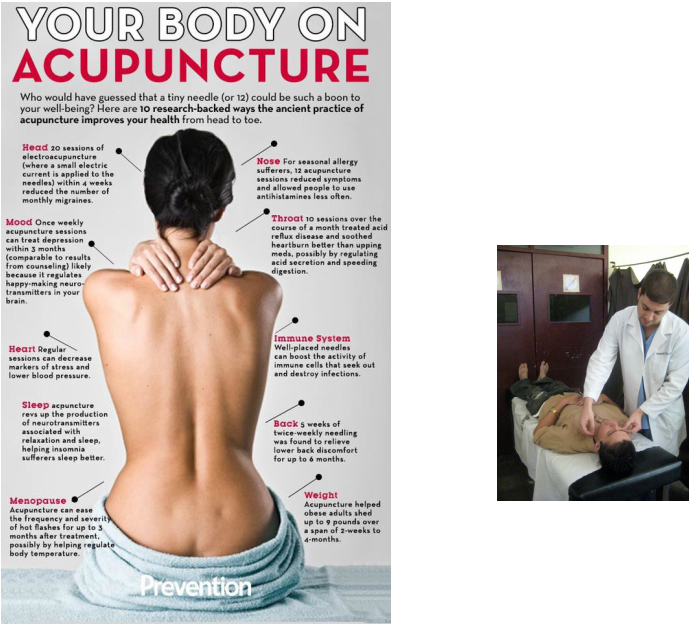 Documented use of Acupuncture in China and other parts of the world dates back over 5,000 years.  Ancient Acupuncturists would insert needles into specific acupoints on the body to promote the circulation of qi (vital energy/oxygen), blood, lymph and other vital fluids in the body.  Acupuncture would also be used to release muscle tension and emotion distress, relieving a vast variety of pain.

Modern Acupuncturists practice in very much the same way as their ancient counterparts did with all the advantages of modern medical knowledge and technology.  An Acupuncturist’s goal is not to attack a foreign invader such as a bacteria or virus, but to promote balance and harmony within the body.  In this way the body’s immune system and internal environment are enhanced to promote healing and growth, thus inhibiting infection, inflammation and disease.

Acupuncturists are also trained to use Moxibustion which adds energy into the body through topical heat therapy.  In addition, they are trained in the use of Gua Sha to release muscle tension and cupping to promote circulation and respiratory health, as well as Tui Na or Chinese Medical massage.

Chinese Herbal Medicine like Acupuncture has been in use for thousands of years.  This Medicine has been expanded and refined over the centuries, most notably over the past fifteen hundred years.  Chinese Herbal Medicine acts as a traditional form of Internal Medicine treating thousands of conditions of the Organs, Bowels, Joints, Bones and Sense Organs, as well as a vast array of mental health conditions. The advantage that Chinese Herbal Medicine has to other traditional Herbal systems is its unique synthesis of many different single herbs into large formulas.  These formulas can directly address specific conditions and avoid unwanted side effects.  For example, a formula used to treat an infection will combine herbs to reduce inflammation, remove toxicity and to aid the digestion.  The latter herbs, those for digestion, sooth the gut and prevent any side effect from the stronger herbs used to treat the infection itself.